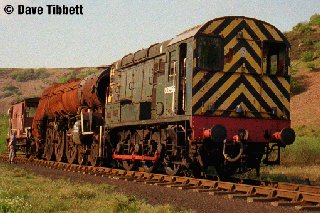 Built at Darlington in 1959 as D3723, this locomotive was initially sent to Kings Cross depot. After a spell as station pilot at Marylebone, this shunter was withdrawn from BR service at Willesden MPD in June 1990. This was the second time the locomotive had been withdrawn, as it first succumbed in May 1985, being reinstated 2 months later.

Purchased by a NYMR member on 15 September 1993, it arrived on 23 October that year. It was initially used at the Grosmont end of the line, but was loaned to the Permanent Way Department in 1999 to cover for the unavailable Drewery shunter.