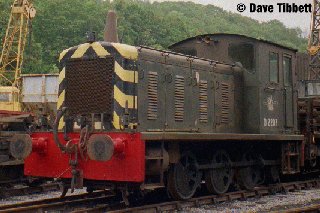 Similar to the BR class 03 shunter, they were fitted with a 204hp Gardner engine, fluid coupling and a five speed epicyclic gearbox. The class were distributed widely around the BR network and several, though not D2207, were fitted with skirts to operate the Wisbech and Upwell Tramway.

D2207 was withdrawn from BR service, as a shunter at Crewe Locomotive Works, at the end of 1967, being purchased by CAEC Howard Ltd of Hemel Hempstead. It was acquired from there in 1973, becoming the shed pilot at Grosmont for several years. It also made infrequent trips an light passenger trains around this time, before standing out of traffic awaiting suitable spares.

Overhauled and restored to working order in 1982, the locomotive was transferred to New Bridge Permanent Way Depot. It saw quite regular service for the P Way department and was usually a star at Levisham during the Thomas weekends. It was also a popular locomotive on diesel gala shuttles.

After another overhaul, D2207 returned to traffic in 2018, being allocated to Pickering C & W to replace 08850, which was in need of attention at Grosmont.