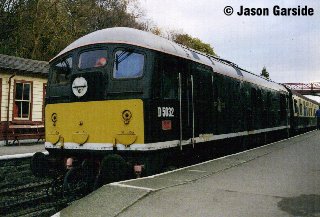 A total of 151 of these Type 2s were built at Darlington, Derby and Crewe works. D5032 was one of the Crewe built locomotives, entering traffic at March in July 1959. After a spell at Statford the following year, it moved to Willesden and then to Bletchley in 1961. From then on the locomotive was based on the London Midland Region, being withdrawn from Crewe Diesel Depot, as 24032, on 17 July 1976.

It was sold to T J Thomson Ltd, a Stockton scrap dealer, less than a week later and was soon on its way north under its own power. The NYMR was able to secure the long term loan of this locomotive. It immediately proved itself a reliable and popular performer, both on passenger and engineer's trains. By 1986 this locomotive had covered 100,000 miles in preservation (on an 18 mile railway!) and had been named 'Helen Turner' after the daughter of a director of the scrap dealer.

Three years later, it was withdrawn for a bogie and traction motor overhaul, returning to service late in 1990. A replacement turbo-charger was fitted in 1995 but, by 1999, this veteran locomotive was not in best health. After some 'TLC' it was able to work on some shuttles at that year's diesel gala.

A protracted overhaul, including making the loco suitable for use on the Esk Valley line to Whitby, has taken place since then, and it is hoped that D5032 will return to traffic in the next couple of years.