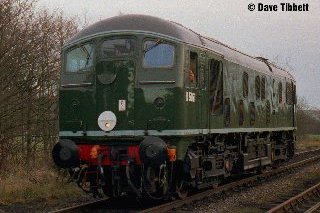 This is the second class 24 to move to the NYMR, arriving on 1 June 1994, bringing half of the preserved class 24 fleet to this railway.

In October of that year it went to Derby Works, emerging into departmental stock as TDB968007. It was withdrawn again on 18 December 1978, before entering service with the Railway Technical Centre at Derby. It was renumbered as 97201 on 18 August 1979, named 'Experiment' in June 1980, and withdrawn for a third time on 4 December 1987, moving to Vic Berry's Leicester yard under its own power in July 1988.

After a protracted stay there, it was purchased for preservation, moving to the Midland Railway Centre on 19 July 1991. A year later it moved to the North Tyneside Railway, before moving south again to the NYMR. Its first duty on this railway was as the star of a KitKat advertisement. After an overhaul and repaint into early green livery (with no yellow!) it proved to be another reliable worker. This loco is currently at Grosmont MPD awaiting its turn for overhaul.