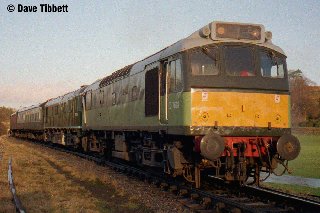 A total of 324 class 25 diesels were produced, with a higher rated power unit than the earlier class 24s. Coming from the final batch of 26, D7628 was built by Beyer Peacock in Manchester, entering service at Tinsley in October 1965. After a spell at Wath, it moved to the Midland Region in 1967. Re-numbered 25278, this loco was the last of its class to receive a general overhaul, at Derby, in 1981. Although officially withdrawn on 15 March 1987, it managed to work a Bescot-Crewe freight 2 days later!

Painted in a two tone green livery and named 'Sybilla', at the request of its former owner Jos de Crau, it has been a regular worker on the line. In 1998 it gained RESCO certification for limited use on the main line, but it spent most of 1999 in the shed at Grosmont receiving a top end overhaul. It is a regular performer on Network Rail - though only between Whitby, Grosmont and Battersby!