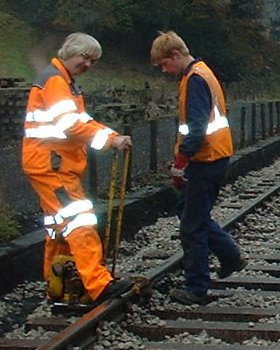 I started volunteering on the North Yorkshire Moors Railway back in 1976, initially in catering. In the early 1980s I started training with the Operating Department. In the late 1980s I started working for the railway, initially on a seasonal contract but, since the early 1990s, I have been a member of full-time staff here. Currently I work as a guard, but still do some turns as a volunteer, including occasionally driving diesel shunters.

This website is not 'officially recognised' by the Railway's management at this time, so it should be remembered that any comments within are mine and, thus, not necessarily those of the Railway itself.

This is me on the left, in a photo taken by the late Roy Cross, while I was working with the S&T department during the winter months.